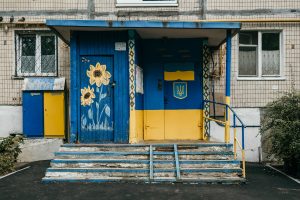 Once again, thank you for your care and support!

I’m sorry I couldn’t respond earlier. We had some tough days here.

I was asked by ECREA [Anm. d. Red.: European Communication Research and Education Association] to write about my recent experience. I’m not sure if they are going to publish it anywhere but I decided to forward my text to you – it summarizes major developments and my emotional response to that.

Right now I’m with my family in Khmelnytsky, a town in the western part of Ukraine. It is quite calm here, especially compared to where we had been during the first ten days of Russia’s invasion. When the first shelling happened on Feb. 24 me and my husband took our son who was suffering from fever that night, grabbed an emergency bag, which we had prepared beforehand in the light of all warnings in the media, and headed to our relatives outside Kyiv. Our plan was to pick up my Mom who lives in Bucha, a small town near Kyiv, and go to Severynivka village. We thought that Severynivka would be the safest option for us to stay while deciding what to do next. It turned out differently. Fighting near Severynivka followed quite soon. The village is close to the highway which connects Kyiv with Zhytomyr. The Russian military has been trying to get control of the highway and attack Kyiv from the west. The house we stayed in is located almost in the forest, which separates Severynivka from the highway. Hence, we didn’t see much but we heard a lot. Sounds of explosions were so powerful that our walls and windows were shaking. We realized we couldn’t stay in the house when the fighting intensified – it seemed too dangerous. Instead, we decided to hide in the basement. It’s not a proper bomb shelter. Nor is it a comfortable basement, which I saw in many houses abroad. Basically it’s a place to store food/vegetables/homemade jam and pickles etc. with a cool temperature inside. We had just 7 degrees Celsius in our earth cellar. Some days we spent 15 hours there. There were nine of us (6 adults and 3 kids) plus a dog that was too scared of strikes/explosion sounds to stay outside. We slept on wooden benches or sitting in chairs. There were breaks in the fighting – we used them to get some rest in the house, eat, get warm and take shower. Electricity was cut when the military plane crashed nearby and damaged electricity lines, but we were lucky to have a generator.

We had just 7 degrees Celsius in our earth cellar. Some days we spent 15 hours there.

After spending 5 days or so in such a mode we realized we should try to move out somehow. Staying was dangerous, but escape was risky too. We knew that Russian tanks/machines were somewhere close to us. We knew that Russians had already been seen in the very village. We heard the sounds of gunfire nearby. We were terrified. At one point we realized that “it’s now or never”. We rushed to our cars and started the spine-chilling journey. When we passed the village road and reached the highway – we saw how disastrous it looked. It was completely empty, there were sounds of distant strikes, remnants of Russian military machines, several corpses on the road and about a dozen of destroyed civilian cars at the roadside. Those 15 km of terrifying wasteland seemed to last forever. Until we reached the first checkpoint. We didn’t know whether it was controlled by Ukrainian army or Russians, but the military guy greeted us in Ukrainian “Armed Forces of Ukraine”, he said adding “Don’t worry, the road is ours up there”. He checked our documents, looked into the car and noticed our son. “Oh, you’ve got a boy here. Wait a minute”, he turned from us and then got back with a small gift, a toy, for our son. We all bursted in tears. Those tears were full of gratitude, relief, pride, sorrow and love.

I wish I could say I feel much better now when we are in a safer place. There’s much more comfort here, of course. There’s less fear. No fighting – no trembling. But… my heart is full of pain for people dying in so many places in Ukraine right now. For Ukrainian soldiers defending us by sacrificing their lives, for civilians trapped in their shelters, for women giving birth to babies under shelling, for children witnessing this incomprehensible horror. For many more.

We grieve. But we also fight. And we also dream. There’s one shared dream all Ukrainians cherish in their hearts – victory and peace. We hold on to this dream. We also indulge in fantasy about small things that bring happiness.

My 9 y.o. son has been compiling the list of things we need to do when “the invasion is over” as he puts it. He said we should promise him we’ll go to the cinema to watch the new “Batman” movie. And me… I dream of seeing the three hundred tulips I planted last autumn in our garden in the Poltava region. I dream of immersing myself in the beauty of spring blossoms in a free and peaceful Ukraine.

Send this to a friend